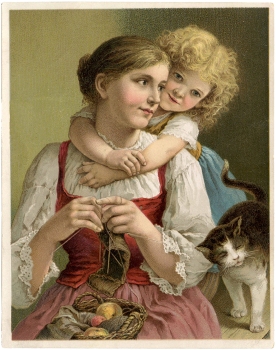 Before I had a child, I used to roll my eyes at the issue of kids who are picky eaters.  BK(Before Kids) I also liked to try and apply my dog training skills to child rearing.  “Well, if they won’t eat it just leave it out and eventually they’ll get hungry enough to eat it! You don’t want to spoil your dog…er, kid.”

Well, I have come to see that this tough love method doesn’t really work on humans.  Whereas a dog may abstain from eating their dog food temporarily in the hopes of eating table scraps, kids apparently abstain from eating particular foods because they inexplicably find them abhorrent and disgusting. While I am digging into a delicious pot of creamy gourmet crispy bacon-topped mac n’ cheese at a restaurant, my child is looking at me like “Barf!”  The same applies to all meat besides chicken legs and steak, any pasta that has more than butter and salt on it, salad dressings, and sandwiches(and the list goes on).

How did this happen to the once super well-adjusted eater that would happily eat a salad, chicken strips, salsa and hummus all in on sitting?  What happened to the chubby toddler who would eat a bowl of bean salad, a cup of minestrone soup and a ham and cheese sandwich?  Somewhere around pre-school foods started dropping off her previously wide open spectrum of edible delights.  The things she loves previously were now “gross.”  We hadn’t done anything differently at home — it just seemed to be a spontaneous thing.  Along with the food aversions came the weight loss.  She is a “normal” weight per her pediatrician, but when my child was always around 80-90% weight and drops down to 30% — it’s troubling, even if it’s irrational on my part.

Hence my inability to enforce the “tough love” and just let her starve one night when she rejects the pasta because I put too much parmesan cheese on it or whatever. The thought of her losing a couple pounds when she is already so slim is just not OK with me.  When I was growing up, my immigrant mother thought I was round and beautiful when I was clearly overweight in middle school, God bless her.  In fact I was called a picky eater growing up, but that certainly didn’t effect my weight, unless it caused me to eat more Chicken in a Biscuit crackers than whole grain breads — but who are we kidding — no one was taking about whole grains in the 80’s.  Well, no one that reached the middle school demographic anyway.

And so 5 days a week my cooking nights involve the meal for my husband and me, and the meal for the little Miss.  We will be eating homemade chicken curry over brown rice and she will be eating one of her 12 approved food items, and that’s acceptable, because counting the ribs on my 7 year old would not be, so there it is.

Mani of the Month 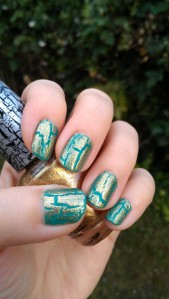 At least 5 random compliments in a week is pretty darn good!

I can not tell you how many compliments I got the week I did this manicure.  Seems like everyone really likes the gold shatter over teal.  You can do this look with any teal/aqua polish and any of the gold shatter/crackles out there (if you can still find them!). Make sure you load the gold on there so it makes a nice constrasty pattern.

You can check out my Goodreads to see what I’m reading right now.  I think I’m in a Regency phase right now — Navy SEAL theme goes right into Regency — obviously.

I am also wrapping up another Lux novel tonight I think.  I totally read the last page first, because I am naughty.  Another cliffhanger!  The next book isn’t even out until August — bah humbug!  This has been a fun series though, but I have a ton of series to finish so this will force me to get back to those, at least until August .  😉

Time for a Coffee,